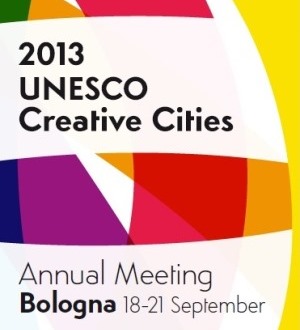 In 2006 Bologna was designated by the UNESCO Creative City of Music, as a recognition of the big role of the music act for this City: Bologna is one of the most important places for Italian and international events and festivals. It hosts important recording studios and independent labels at international level. It houses in its city centre the Music Conservatory G.B. Martini, one of the oldest and most prestigious in Italy, and International Orchestras and Choros.

After seven years from this designation, from 18th to 21th September 2013, the City of Bologna will host the Creative Cities Network Annual Meeting. The representatives of 34 member cities making part of the network will meet in Bologna to attend to a four-day event: city administrators and the international representatives, divided into seven thematic working groups, will discuss about the activities of the network through seminars, meetings and events developed all over the city centre of Bologna.

In the same days Bologna will host activities open to the public: a special event Makers in the Creative City will take place bringing together institutions and professionals from the creative industries and cultural sector; a concert by the emerging artist Cristina Zavalloni will be held at the Unipol Auditorium; other artistic performances offered to Bologna by other creative cities of music will be held in some other prestigious venues of the city centre.

Genus Bononiae is very proud to host the Welcome Cocktail of the 2013 Unesco Creative Cities Annual Meeting in Palazzo Pepoli, the Museum of the History of Bologna, that will take place on Wednesday, September 18th.
Fabio Roversi-Monaco, President and C.E.O. of Genus Bononiae and Virginio Merola, Mayor of Bologna, will welcome all the representatives from 34 creative cities coming from all over the world.

The participants will be free to visit the Museum of the History of Bologna in an exclusive way.
During the “subnetworks study visits” scheduled for Friday, September 20th, the “Music” group will visit the Tagliavini Collection in San Colombano, and Maestro Tamminga will carry out a private visit for them, also playing the historical musical instruments making part of the collection.