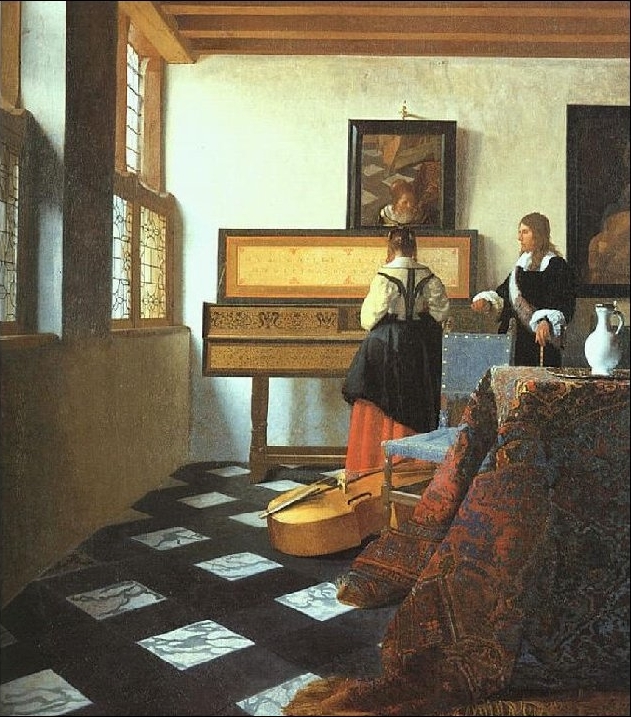 This epigram, written on the virginal which Vermeer painted in his famous Music Lesson preserved at Buckingham Palace in London, would be an ideal title for the homage Bologna is paying to the great Dutch painter on the extraordinary occasion of the exhibition of his Girl with a pearl earring.

It is hard to imagine a better venue for an encounter between painting and music, and at the same time between art of the Low Countries and of Italy, than San Colombano in Bologna. Two of the most valuable instruments preserved there are protagonists in this encounter: the virginal from 1604, made by the great Antwerp makers Johannes and Andreas Ruckers (kindly loaned to the museum by M° Giuseppe Accardi) and a harpsichord built in 1685 by another outstanding Flemish master, Matthias of Ghent, active in Rome.
The virginals we see in various Vermeer paintings can indeed probably be attributed to the Ruckers family: the Music Lesson, the Girl interrupted at her music,and many other representations of young ladies at the virginals. Indeed, on two harpsichords that Andreas Ruckers built (in 1624 and in 1640, respectively), we see the Latin motto that defines music, an art close to Vermeer’s heart, as a “companion of joy, and remedy for sorrows.”

In the harpsichord by Matthias of Ghent, the bond between Italy and Flanders brings together sound and color. Indeed, the instrument displays painted decorations made by another Flemish master active in Rome, Jan Frans van Bloemen, nicknamed ‘L’Orizzonte’ (the horizon).
It is fascinating to compare Dutch landscape and marine art by Meindert Hobbema, Jan van Goyen, and Jacob and Salomon van Ruisdael, visible at the exhibit From Vermeer to Rembrandt, and van Bloemen’s contemporaneous paintings on the harpsichord of Matthias of Ghent, with its views of Rome, the Roman countryside, and the marina at Ostia, which disappears into the sea and the horizon on the tail and the long side of the instrument.

The museum of San Colombano, with its collection of ancient musical instrumets donated by Maestro Luigi Ferdinando Tagliavini and the specialised library of Bolognese musicologist Oscar Mischiati, becomes the privileged venus for the musical activities organized by Genus Bononiae on the occasion of the exhibition Girl with a pearl earring at Palazzo Fava

Initiatives:
– New cd Vermeer in Bologna, recorded in San Colombano with musical instruments in the age of Vermeer
– Concerts and themed conferences (every Sunday at 5 pm)
– Exhibition of scores, engravings and musical instruments